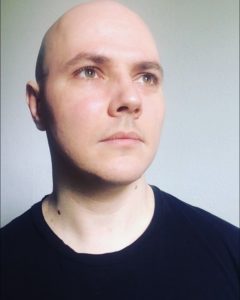 I’ve been performing since I was 6 years old, as a student in ballet dancing, which I practiced from 6 to 16. Dancing has been a part of my whole life, and later on I started training in Irish dancing and figure skating, and more recently modern jive.

When it comes to magic, I started fanning cards at the age of 11, and this virus never let go of me…
I trained in magical arts until I graduated from High School, in 2000.
That same year, I got my first professional contract in a famous cabaret in Montmartre, Paris.
From 2000 to 2013, I worked in the most prestigious cabarets of the French capital, in Montmartre, Saint-Germain des Prés, Champs Elysées… Before moving to London, UK, where I have been performing since then.

In 2009 I Started learning acting at the Drama department in Clamart Conservatoire, France. In 2013 I moved to London UK and I continued my training in Elizabethan English, focus especially on Shakespeare. Over the last few years I have been performing with the Shake-scene Shakespeare Company, which puts on stage performances acted from cue-script.

Stage is my life and love and sharing it with a company of performers to entertain an audience is what makes me truly happy.

I hope to see you soon in the audience or on stage !